Fill out the form below for more information! 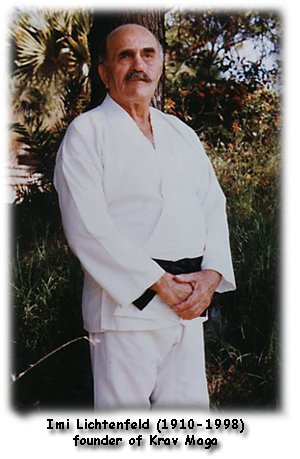 Krav Maga was founded by Austro-Hungarian born Emrich “Imi” Lichtenfeld, born May 26, 1910.
He grew up in Bratislava, Slovakia. As a young man he was a successful boxer, wrestler and gymnast.

In the 1930’s Lichtenfeld became a leader of a group of Jewish Boxers and wrestlers who took to the streets to defend Jewish neighborhoods against the growing numbers of national socialist party and anti-semitic thugs that threatened his neighborhood. He quickly discovered, however, that actual fighting was very different from competition fighting and although boxing and wrestling were good sports, they were not always practical for the aggressive and brutal nature of street combat. It was then that he started to re-evaluate his ideas about fighting and started developing the skills and techniques that would eventually become Krav Maga.

In 1948, the State of Israel was founded and the Israeli Defense Forces (IDF) were formed. Lichtendelf became the Chief Instructor for physical fitness and Krav Maga at the IDF school of combat fitness. He served in the IDF for about 20 years. During this time he developed and refined his unique method for self-defense and hand to hand combat. Faced with the task of preparing a wide variety of soldiers, from physically fit to the out of shape, Lichtenfeld developed a comprehensive system that relied on simple, instinctive moves rather than rigid techniques requiring years of training.

Handing over the IDF

In 1964, Lichtenfeld retired from the Israeli military. He then began to modify Krav Maga to fit the needs of police forces and ordinary civilians. He trained teams of Krav Maga instructors who were accredited by him and the Israeli Ministry of Education.

In 1968 Eli Avikzar, Lichtenfeld’s principle student and first black belt, began learning Aikido. ?In 1971 Avikzar left for France where he received his brown belt. Upon his return, Avikzar started working as an instructor alongside Lichtenfeld where they improved Krav Maga by incorporating counter defenses into the system. In 1974 Lichtenfeld retired and handed Avikzar the Krav Maga training center in Netanya. ?Shortly after, in 1976 Avikzar joined the permanent force of the IDF, as the head of the Krav Maga section.

The growth of Krav Maga

When Krav Maga started to grow beyond the borders of Israel, there arose a need to create an international civilian organization. Therefore, in 1995 Lichtenfeld, along with a few of his first and second generation students, created the International Krav Maga Federation (IKMF).

From past history to modern day Krav Maga

Today, Krav Maga, (know as “Contact Combat” in Hebrew) is the official self-defense and fighting system used by the Israeli Defense Forces. In addition to the IDF, Israeli Police, militaries, anti-terrorism units, and numerous law enforcement agencies train in Krav Maga. Because of it’s a highly evolved training system, Krav Maga continues to be the most realistic combat training to date. Developed and continually enhanced during years of conflict, Krav Maga emphasizes easy to learn and extremely efficient techniques that have been battle tested in real life confrontations.