Fill out the form below for more information!

QC Krav Maga is a top-notch Martial Arts and Krav Maga facility in East Moline, IL that is perfect for you and your family. The skills taught here are elemental to the ancient art of Taekwondo, Aikido, Judo, Kali, Wrestling, kickboxing, boxing, MMA, Karate, and other popular competitive disciplines. Krav Maga is perfect for those looking to pick up a few self-defense and personal protection techniques because it?s focused on countering attacks from opponents. Having the ability to defend yourself and others at a moment?s notice can be the most important goal you?ve ever set and achieved! 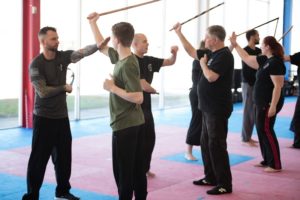 Training at QC Krav Maga incorporates specialized training methods used to challenge students physically and mentally. This type of training strengthens the spirit and develops the ability to deal with violent confrontations under stress. These training methods have been used in Israel?s most elite units and have proven themselves worthy in preparing for combat. Our expert Martial Arts instructors, under the guidance of Anthony Linnabery, ensure that you are always doing the techniques correctly to develop proper muscle memory and automatic reflex. This is important for keeping you and other students safe from injury. At QC Krav Maga, we employ industry-leading equipment, policies, and procedures to promote ?safety first? as you pursue awesome, attainable self-defense, fitness, personal, and professional goals in the Martial Arts.

Krav Maga is the official hand-to-hand combat system of the Israeli Defense Forces. It?s also the preferred system for U.S. Military and law enforcement personnel. Krav Maga is NOT a traditional martial art. It?s a modern method of dealing with violence, based on empirical study of operatives in the field. The lethal nature of Krav Maga simulates real life situations. It teaches people to protect themselves and to cope with violence. To be effective in battle, Krav Maga does not include rules or limitations. Therefore, there are no sport competitions for Krav Maga because it is designed to remain a realistic fighting system.

Based on simple principles and instinctive movements, this reality-based system is designed to teach real self defense in the shortest possible time. Learn to defend against common chokes, grabs, and bearhugs, as well as weapons such as guns, knives, and sticks. Just as important, we teach people to function during the stress and shock of a sudden, violent encounter. Tested on the battlefield and in the streets, Krav Maga?s practical approach to self defense will make you safer and more secure. 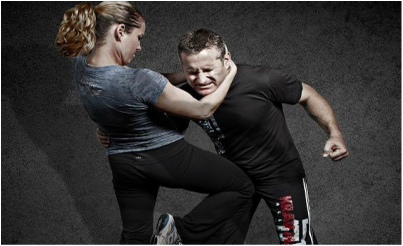 Here at QC Krav Maga in East Moline, IL our self defense for women incorporates a training method designed to build a woman?s fighting spirit and to train her how to respond to a potentially serious situation.? Fear caused during a violent encounter can cause what is know as ?cognitive freezing.?? With the right mind set and individual can overcome this fear and the sudden shock of being attacked.? The chief instructor, Mr. Anthony Linnabery, uses real world situations in order to paint a mental picture of what an attacker is doing and why we use our highly effective self defense systems.? Women learn to harness their survival instinct, to turn fear into aggression and to neutralize the threat quickly.